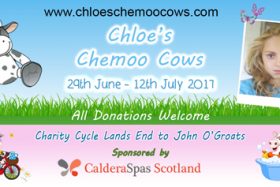 Journey today has taken the group from Kendal to Dumfries through Penrith, Carlisle and finally on to their hotel this evening in Dumfries. The guys are finally back in Scotland as you can see from the pictures below but not without some problems today.

First bit of damage of the cycle!!.. Stevie’s bike has decide to break today on Shap Hill climb where the gear mechanism had decide to break, causing the chain and gears to jam up and throw him off the bike.

Stevie is ok and not hurt but glad it was on the way up and not on the way down or it could have been a very different story that we are posting. Stevie will now until Friday be cycling on the spare bike as his will be brought back early tomorrow for repair by Duncan at Irvine Cycles as they have serviced and looked after the guys bikes from the start of the cycle with regards to servicing and repairs. Again a massive thank you to Duncan for the good work and hopefully we will have Stevie’s bike back for the Scottish leg of the cycle.

Second bit of damage today was Mark’s bike where again on Shap Hill climb managed to damage a wheel but again he is ok and no injury’s.

A monumental day with the guys reaching the border and with a good rest tomorrow in their own beds bring on Scotland!! Damage to Stevie’s bike plus it looks as if it has also broke the Frame where the wheels bolt on!! Looks like the guys have given Stevie some first aid by means of a Cuddle and all is good!! This website uses cookies to improve your experience while you navigate through the website. Out of these, the cookies that are categorized as necessary are stored on your browser as they are essential for the working of basic functionalities of the website. We also use third-party cookies that help us analyze and understand how you use this website. These cookies will be stored in your browser only with your consent. You also have the option to opt-out of these cookies. But opting out of some of these cookies may affect your browsing experience.
Necessary Always Enabled
Necessary cookies are absolutely essential for the website to function properly. This category only includes cookies that ensures basic functionalities and security features of the website. These cookies do not store any personal information.
Non-necessary
Any cookies that may not be particularly necessary for the website to function and is used specifically to collect user personal data via analytics, ads, other embedded contents are termed as non-necessary cookies. It is mandatory to procure user consent prior to running these cookies on your website.
SAVE & ACCEPT
Showroom Opening Times